South Africa Must Resist Another Captured President: this time by the markets

My article in Conversation can be found here:
https://theconversation.com/south-africa-must-resist-another-captured-president-this-time-by-the-markets-92051

The African National Congress (ANC) has made a dangerous habit of bringing post-apartheid South Africa to the brink of instability and the common ruin of all. The resignation of former President Jacob Zuma and his replacement by Cyril Ramaphosa was such a moment. It brought home the point that the over-concentration of power in the office of the president has clearly not worked.
A rethink on president-centred politics and the threats it poses to the democracy are crucial for the post-Zuma period. South Africa needs to re-imagine democratic practice, leadership and how power works.
Some sections of South African society have reduced the Zuma problem to a corruption problem. Dismantle Zuma’s kleptocratic network, the argument goes, and all is solved. Zuma’s demise and a few high profile prosecutions will suffice.
But another view on the Zuma problem – and one with which I concur – suggests it is a problem of contending class projects inside the ANC. The neoliberal class project under Presidents Nelson Mandela and Thabo Mbeki saw South Africa integrated into global markets. It maintained stability through modest redistributive reforms. This project laid the basis for a new black middle class to emerge while systematically weakening labour and the left.
But it surrendered the state (including the presidency) to transnational capital and the power of finance.
The Zuma project, on the other hand, advanced looting as the basis of accumulation and class formation. The extra-constitutional state that emerged deepened the macroeconomic, institutional and legitimacy crisis of the ANC-led state. The left and labour, aligned with the ANC in the tripartite alliance, were co-opted and divided. Both these projects are entrenched in the ANC.
Now what? Messiah-centred presidential politics is extremely dangerous. This is particularly true in a country of extreme inequality and with a formal concentration of power in the office of the president. If politics is not represented, thought and acted beyond this, South Africa is going to repeat historical mistakes.
Since the ANC’s December 2017 conference the media, the banks and international institutions have been talking up a narrative of the “Cyril effect”. Zuma’s removal is attributed to this. In fact the Cyril effect is a narrative of capture of South Africa’s new president by transnational and financial capital.
South Africa’s democracy cannot afford another captured president beholden to credit rating agencies, currency fluctuations, investment flows and business perceptions. South Africa’s democracy has to be grounded in the needs of its citizens and the mandates given by its Constitution.

The ‘Cyril effect’ is hyperbole

The end of Zuma was in fact not because of the Cyril effect. In the main Zuma was removed by the people’s effect which connected the dots of corruption, a mismanaged state and rapacious capitalism.
This resistance was expressed over 15 years through various institutions and social forces. These included:

As a result of all this activity the crisis of legitimacy in the ANC – and the ANC state – has deepened. This has placed immense pressure on the party to act. In this context, Ramaphosa is playing out his role out of necessity and to secure the ANC’s electoral fortunes.
For middle class and rich South Africans Ramaphosa’s state of the nation speech represented a return to normalcy – a democracy that works for a few. That’s not to say that the new president didn’t make some important announcements in his state of the nation address. This included his comments about state owned enterprises, redistributive state programmes and anti-corruption mechanisms.
Nevertheless, the speech struck chords that resonated with the “return to normalcy” narrative.
But South Africans can’t repeat the mistake made in 1994 when progressive civil society demobilised. The people’s effect has to continue to shape a post-Zuma democracy in the interests of all. The ANC has abused majority support and cannot be trusted with the future of South Africa.
People’s power has to be strengthened and continuously mobilised around strengthening democratic institutions, ending corruption, fundamental economic transformation and advancing systemic alternatives to the climate crisis.
Posted by Unknown at Sunday, February 25, 2018 No comments:


My defence of social and climate justice on Radio 702 can be found here and below link to full recording:

South Africa’s only possible path to economic prosperity is through competing successfully on the global stage, according to independent strategy adviser Shawn Hagedorn.
Responding to this week's State of the Nation Address (Sona) debate Hagedorn has described SA's current perceptive on the economy as 'isolationist' and says the country's focus on redistribution and reparations is limiting.
He says global integration is needed for a workable growth model.

The whole sort of political, economic nexus, it really centers around social justice issues and is completely debilitating economically, so you have a shift from where a lot of the corruption issues are going to be addressed and what's then going to be left is not a workable growth model.
— Shawn Hagedorn, independent strategy adviser

There is no way that through redistribution, there is going to be restoration, reparations, for the injustices of apartheid, it's just not going to happen.
— Shawn Hagedorn, independent strategy adviser

There is really no place where you you have one large economy without any real benchmark competitors. The only way South Africa can work out that the economy is failing dismally, is through the credit rating status.
— Shawn Hagedorn, independent strategy adviser

His argument is that we have got to think with historical amnesia in South Africa in order to go forward and I think that is fallacious.
— Vishwas Satgar, Associate Professor, Wits University

I disagree with this perspective that we have had an isolationist position. South Africa is a deeply globalised economy, and in that context it was premised on compromise and the political bargain was about allowing historically white capital to have mobility in and out of this economy, but at the same time there was an expectation that it would also invest in this economy. Create jobs...
— Vishwas Satgar, Associate Professor, Wits University

That promise at the heart of that bargain was not realised an actually what you have instead is a high concentration of wealth at the top. Inequity has been one of the outcomes of this deeply globalised economic process.
— Vishwas Satgar, Associate Professor, Wits University

Click on the link below to listen to the full debate...
Posted by Unknown at Sunday, February 25, 2018 No comments:

Launch of Climate Crisis Book! All are invited. 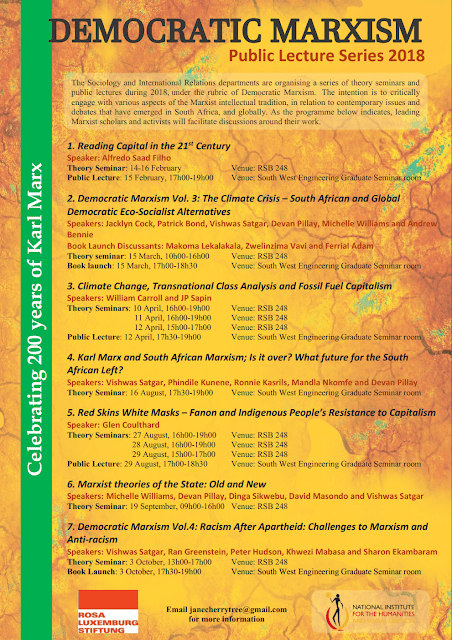 Posted by Unknown at Saturday, February 24, 2018 No comments: 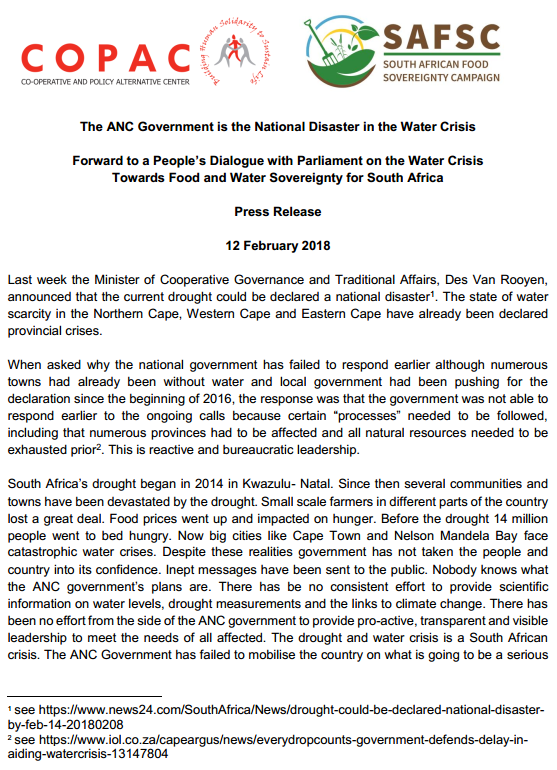 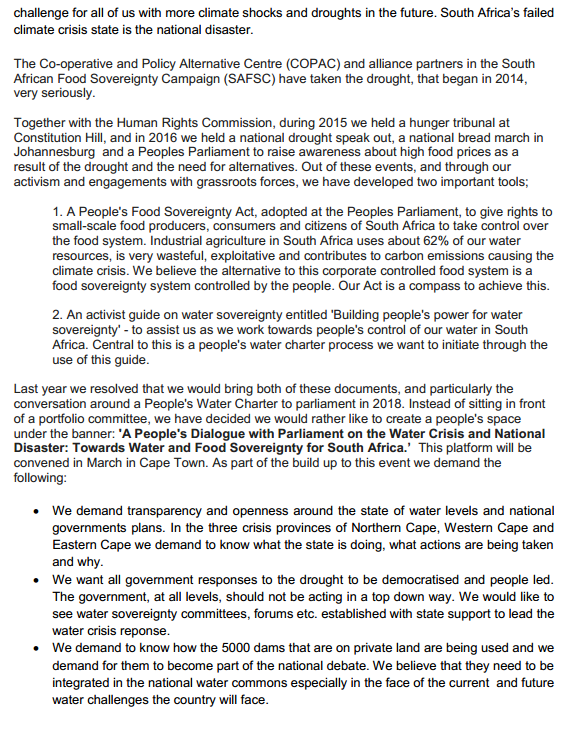 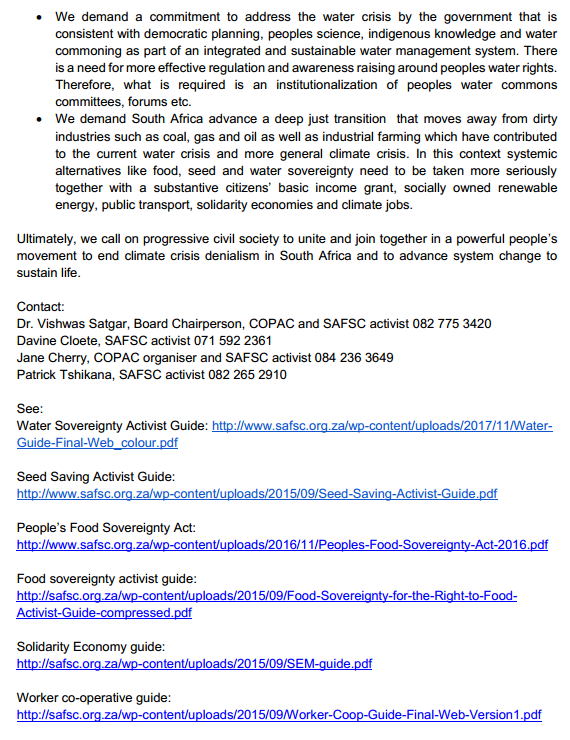 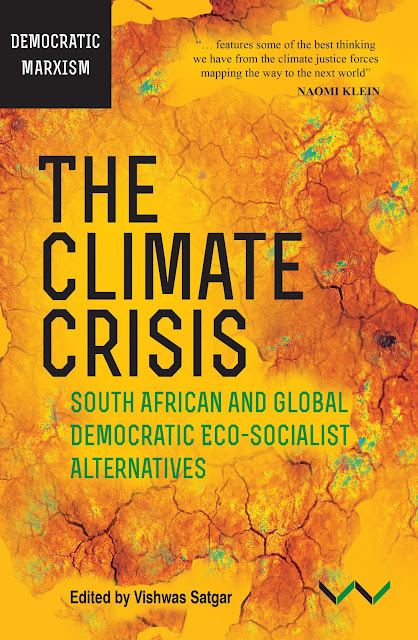